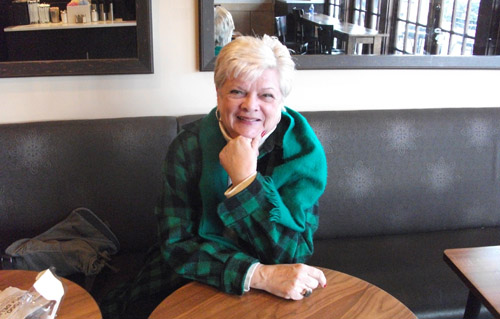 Recently Sayville.com’s theater critic Joan Lengyel took a taxicab from her Sayville home bound for the Ronkonkoma train station, boarded a train to Jamaica, Queens, disembarked, got on board an air train which took her to JFK airport and enjoyed a flight to none other than Los Angeles International Airport before finally settling in at her destination – the Beverly Hills Hilton Hotel where she would await to attend the 69th Golden Globe Awards which was held in the hotel’s grand ballroom. For the second time in her life she witnessed the elaborate red carpet walk of fame and a close-up viewing of the actual event, having also attended the Golden Globes in 2010. Lengyel had the rare opportunity to see a bevy of stars during her adventure including Madonna (nominated this year for “Original Song, Motion Picture” for ‘Masterpiece’), Meryl Streep (nominated this year for “Actress in a Motion Picture, Drama” for her performance as British Prime Minister Margaret Thatcher in ‘The Iron Lady’), Brad Pit, Angelina Jolie, dame Helen Mirren, George Clooney, and one of her long time favorite thespians Gerard Butler. Lengyel has made a point of following the talented Scot’s career for a long time now and was thrilled when she asked him for an autograph and Butler (who presented the “Best Supporting Actor” award at the event) having no piece of paper at the time, took the time to hand her his script for the show and signed his autograph on it. When Lengyel diplomatically asked the actor to smile during a photo op he replied “My Mom always says that to me too. She says I smile for everybody else but her”. While asking Academy Award winner George Clooney (nominated this year for “Best Actor in a Motion Picture, Drama” for the film ‘The Descendants’) who Lengyel described as “so gracious, very animated” for his autograph, upon handing him her autograph book to sign she addressed him as “George Clooney Academy Award winner” as she was handing him the book. “He paused and looked right at me,” Lengyel said. “As if I were psychic or something. It was a moment in time, really interesting.”

This recent trip is certainly far from Lengyel’s first experience at such activities. The local artist and film historian has been to countless movie premieres at a wide spread of locations (most recently for the films “Machine Gun Preacher” and “Law Biding Citizens”, both starring Gerard Butler) and travels extensively with various organizations comprised of individuals who share her passion. She has traveled to Berlin, Ireland, London and Scotland to name a few to keep those passions burning and always has more on the burner. Recalling how she was inspired as a young girl after seeing the film “Scarlett Street” starring Joan Bennett, her interest in the arts has played a major role in her life. Seeing her favorite stars finally receive their due at award shows gives her a real sense of satisfaction. “I think the journey is the interesting part,” Lengyel explained. “How they just kept going and finally this is a reward. It’s the perseverance, being able to handle rejection. Yeah, I think acting is great. You can value it. I think they deserve the acknowledgement.”

Joan Lengyel is the former president of The National League of American Pen Women, Suffolk Branch. She was admitted into the League for Outstanding and Unique Illustrations, is also a member of the oldest art group in Suffolk, the Wet Paints Studio Group of Sayville, and is a recent member of Women Sharing Art. She has created a series of representations of movie theaters called “The Magic of Main Street Movies”, and is a member in The Theater Historical Society of America and The Cinema Theater Association based in London, England. The multi-media artist has been commissioned to do renderings for historical societies, community organizations and privates portraits. Her unique boutique line of note cards can be found at museums and upscale gift shops.