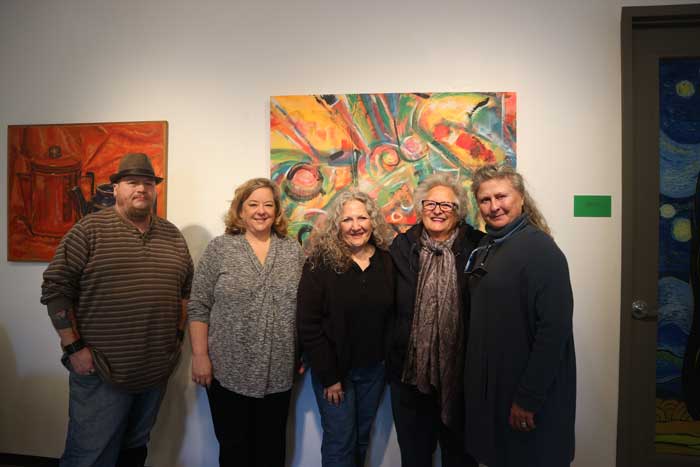 There’s a new, sprawling exhibit hung in the Artspace Gallery.

As the month of March approached, Artspace resident and curator Dave Rogers knew he wanted to feature female artists for Women’s History Month. “We used to have a resident here who put together women’s shows, but she moved out,” Rogers said. An organization soon came to mind: Women Sharing Art, a Bayport-based nonprofit that brings creative women together.

“They put on really good shows,” Rogers said, and thought the gallery in Artspace would be an ideal location for this exhibit.

“Residents have priority for using the space, but the whole idea is to bring in other groups to share with the community,” Rogers explained. “Otherwise, you’d be seeing the same stuff over and over again.”

“Broad Spectrum” opened March 11 and is by no means repetitive.

Hintz explained that the “Broad Spectrum” theme, though not rigid, asked artists to think about aspects of femininity and womanhood. Hintz created a stunning mosaic called Thank you, Rosa Parks that depicts Parks sitting on a golden chair on a dimly lit bus. “I was trying to figure out something to do with the theme and she popped into my head,” Hintz explained. “I started thinking about how hard it must have been for her to sit on that bus and not take it anymore. She had this quiet dignity that I always admired. It’s a reminder to say how you feel even though it may be hard. It’s important for all of us to stand up for ourselves and support each other,” Hintz said, pausing. “Especially now.”

Timeliness and political relevancy also come into play at this exhibit. Photographer Carole Amodeo has several photographs on display, three of them of women taken right on Terry Street during a peace rally held in November.

In response to KKK flyers that were distributed in the village, nearly 100 demonstrators rallied outside of Artspace calling for unity, acceptance and peace. “These are women who are strong,” Amodeo said, pointing to her photographs.

One piece in particular directly opposes the new administration. Entitled Sum of My Parts, Eileen Palmer crafted a mixed-media collage with tempera paint, ink and lipstick that show a deconstructed female body and adjectives that pair up. “A lot of the art that I do is motivated by making a statement, not always political, but one that makes people think,” Palmer said of her message. She originally constructed the body print for another show that asked artists to create self-portraits. For this woman-themed show, Palmer wrote the adjectives unique to her: mother, daughter, artist, realist, teacher. “They’re all the things that make up me and go to show that I’m more than just my face and body. I’m a million different things,” Palmer said.

The piece, Palmer explained, is timely, since it shows the dimensions of women. “We’re powerful. We have struggles, challenges, successes that shouldn’t be overlooked or marginalized.”

Especially in art, she said, which is why working with Women Sharing Art has been a great experience for Palmer. “It’s sort of in the spirit of the Guerrilla Girls,” Palmer said. “When you walked into a museum, 90 percent of the artists were men. So women were depicted naked but were not the artists,” adding that this local group helps women stand up to create their own works of art. “I love landscapes and pretty things, but also making art that does something more than that,” she said.

Watercolor artist Victoria Beckert used the show as an opportunity to show stunning, colorful scenes of her family enjoying the beach. Across the gallery, a painting shows a matriarch holding her newborn. Towards the back, you find a sobering depiction of one artist’s interpretation of her own mother, who struggled with Alzheimer’s. “It’s powerful,” Hintz said on the multitude of works in the show.

A perk of holding this show at Artspace, Hintz explained, was the size of the gallery. “A lot of artists can feel left out if they work big,” Hintz said. One artist, who frequently uses large stretches of canvas to create colossal works, has a few pieces in the show, something the group is usually unable to accommodate. “Most galleries are relatively small,” Rogers said, adding that this gallery boasts 2,000 square feet. This particular exhibit features 63 pieces, but in past shows curated by Rogers, he has hung upwards of 290 pieces in the room. “So it’s an advantage we have here,” Rogers said, laughing at the play on words. “We have space.”

The March 11 opening was planned in conjunction with an exhibit John Cino was opening next door at the Patchogue Arts Council gallery, entitled “Anonymous.”

The idea of anonymity, Cino explained, popped into his head last spring as he began to ponder how societies can be made up of individuals — all human — that deny basic human rights to one another. “It’s a show about the way in which people put people in categories,” Cino said. “And using that as a means to treat them … less than brotherly.”

The abstract concept wasn’t planned to be an exhibit at PAC, but came together nonetheless. In the group exhibition, seven artists explore anonymity — as a means to victimize, as a condition of economy, homelessness and other social issues. “It seems to be very topical, with hate crimes and immigration issues rising,” Cino said. “In presenting this work, it is hoped that we can all examine where we ‘hide’ our names or look to the places in our lives where we choose not to grant dignity to others,” he added.

“The great thing about Patchogue is that it’s a village that is so supportive of the arts,” Rogers said of the neighboring exhibits sharing an opening night. “When you come to opening receptions, you’ll see village trustees and you might see the mayor. You never know who’s going to pop in,” Rogers said.

Coordinating with PAC, Rogers said, is also a way to “draw each other’s crowds” and introduce new people. He recalls seeing smaller crowds just a few years ago, but now on a typical opening has seen between 300 and 400 people filter through.

“Broad Spectrum” in the Artspace gallery is open Friday, Saturday and Sunday through March 25. “Anonymous” at the PAC Gallery will run through April 23.